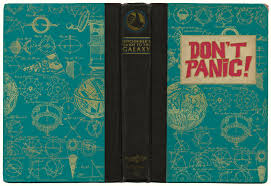 And the angel said to her, "Do not be afraid, Mary, for you have found favor with God. And behold, you will conceive in your womb and bear a Son, and you shall call His name Jesus. He will be great, and will be called the Son of the Most High; and the Lord God will give to Him the throne of His father David, and He will reign over the house of Jacob for ever; and of His kingdom there will be no end."

Although Mary was deeply troubled by the angels greeting – Gabriel counteracts her anxiety with the simple phrase; ‘Do not be afraid.’

A favorite fictional work of mine is the series by Douglas Adams – ‘The Hitch Hikers Guide to the Galaxy’. At one point he explains how ‘The Hitch Hikers Guide’ had become ‘the best-selling book in the whole universe’. The success is attributed to the fact that it has ‘DON’T PANIC’ written in big letters on the cover.

I can’t recall ever meeting a single person who didn’t worry about some thing. Worry can actually be a great motivator! There is though, obviously, a difference between allowing panic and fear to rule our lives and using out anxieties and apprehensions in a creative way.

It is not entirely a scholarly reflection to jump from a phrase that mentions ‘the throne of David’ to the story of David and Goliath – but I’m going to make it anyway. I can’t actually remember when I first heard of the little boy David’s confrontation with the Philistine Giant– but it’s a safe bet that Mary knew the story as well.

Little David is not worried by the size of the task ahead of him because of his faith in a God who was bigger than the troublesome situation that was paralyzing everybody else with fear.

In a similar fashion – Mary – who most commentators suggest was just a young girl – is not floored by the idea of God’s intervention in her life – because the fact that she has ‘found favor with God’ - assures her that whatever may come along – God was going to see her through it!

If God was going to do a great thing – then God was great enough to see that she was up to her part of it. Kind of simple really. But then... I have always had a sneaking suspicion that faith was meant to be that way.

Lord, help me to discover a simple faith,
that trusts in You,
for the big things
and the little things in life.
Thank You Lord.
AMEN.
Posted by AJP at 6:52 PM