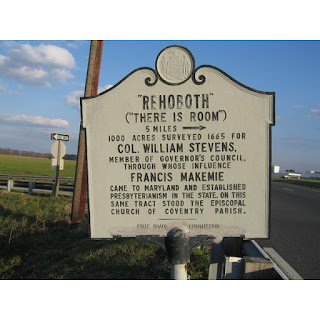 This Sunday at Mount Hebron Presbyterian we are meeting outdoors to celebrate our denominations Scottish heritage.(Last weeks sermon on David can be found here).  Presbyterianism was a widespread movement throughout Europe influenced by the theology of John Calvin. It was one of Calvin's Scottish students, John Knox, who eventually helped establish Presbyterianism as the Church of Scotland through the Scottish Reformation of 1560.

These were turbulent times. Following the restoration of the monarchy in 1660, there was extensive persecution of Presbyterians in Ulster and Scotland. Many Scottish folk fled to Ireland and became known as the Scots/Irish. Some emigrated and settled, mostly in New Jersey, Pennsylvania, Maryland, Virginia and the Carolinas.

Among them was one Rev. Francis Makamie, often described as 'The Father of American Presbyterianism'. Makamie was born to Scottish parents, in Ramelton, County Donegal, Ireland, in 1658. In February 1676, he enrolled in the University of Glasgow. He was ordained in Northern Ireland in 1682 by the Presbytery of Laggan at the call of Col. William Stevens from Rehobeth, Maryland. Col. Stevens had issued the call to the Presbyterian church to send a missionary. Makamie answered that call.

By 1683, Makamie had established four Presbyterian congregations, located in Rehobeth, Snow Hill, Princess Anne (Manokin Church) and Salisbury (Wicomico), Maryland. These churches are often claimed to be the first Presbyterian churches in America.

There were earlier churches established on Long Island under the Dutch colony's jurisdiction during the 1640s. These churches were founded by Presbyterian and Congregationalist ministers and members. Many became Presbyterian in reputation and later became part of the Presbyterian Church. In 1705 the first American Presbytery was organized, along the lines of Scottish Presbyterianism, by Francis Makamie near (or in) Philadelphia. There were seven minsters and 'certain elders' present.

Presbyterians had a large part in the American revolution. The historian Bancroft, wrote that 'The first voice publicly raised in America to dissolve all connection with Great Britain came not from the puritans of New England, nor the Dutch of New York, not the planters of Virginia, but from the Scotch-Irish Presbyterians.” That is hardly surprising given the treatment they historically had received from the British crown!

It is fitting that here in Maryland, where the Scots/Irish Father of American Presbyterianism, Rev. Francis Makamie, began his ministry, we should celebrate his... and our... Scottish heritage. We'll also be taking a brief look at a lady hero of Scottish history and comparing her to the prophetess of Israel, Deborah.  Intrigued? Then come and join us at 10:00 a.m. this Sunday. Let the piping commence!