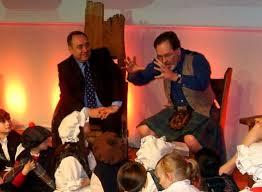 Stories have tremendous power. They are capable of carrying great truths in a way that makes them extremely memorable. Whenever Jesus wanted to say something really important He usually told a story. Many of His stories, like the 'Good Samaritan' or 'The Prodigal Son' immediately remind us of a message, just with the words of the title.

Much of the content of the 66 books of the bible is offered to us as story. Those who dismiss religious writings, as being myth and fable, seem to forget that it is through such vehicles truth is often revealed. Likewise, those who hold to a literal interpretation of scripture passages, seem to have lost the awareness that truth is a many faceted jewel. To insist that such and such really happened, in this actual way, at that particular time, can obscure the deeper meaning of many a text. Biblical literalism can destroy biblical stories.

As an example take that story about the 'Good Samaritan'. (Luke v10:29-37). It's a classic story about loving our neighbors. Among other things Jesus reveals the arrogant self-justification of the questioner, challenges Jewish prejudice against their Samaritan neighbors, ridicules religion that was all talk and no action and lifts up compassion as being a far greater virtue than legalistic observance of ancient traditions.

The sting in the tale comes with the final words 'Which of these three, do you think, was a neighbor to the man who fell into the hands of the robbers?" The lawyer said, "The one who showed him mercy." Jesus said to him, "Go and do likewise."

The truth the story carries does not depend on there having been an actual incident where a man was robbed and three different folk reacted to him in different ways. Two, who should have known better, walk on by. One, of whom not much was expected, becomes a true friend to a fellow human in great need. Compassion wins! "Go and do likewise." Even if this whole conversation were a fictional account, it would still carry exactly the same truth.

We know very little about the childhood of Jesus but can presume that, like youngsters of every age, He was raised by folk who surrounded His life with stories. We do the same today for our own children and grandchildren. Stories have power. They take us to the dark side. They teach us right and wrong. They instill values. They stretch our imaginations. They stay with us.

At Mount Hebron Presbyterian we are approaching our Vacation Bible School week. Bible School is a time for telling stories. Over the last few weeks in our services we've been looking at biblical characters. (Last weeks sermon on Ananias is here). It is important that children hear stories about people of faith. The actual historic details of characters such as David, Deborah, Shadrach, Mischach and Abednego, Bartimaeus and Ananias are probably lost to us. What we do have are stories about their lives, to inspire us to adopt virtues such as courage, wisdom, fearlessness, faith and service.

On Sunday morning, during our outdoor service, I'll be offering to the congregation some Jewish stories that Jesus might have heard when He was just a lad. Will they be true stories? Did Jesus really hear them? Was He influenced by them? Who first told them? It doesn't matter. What matters is the truth the stories contain. Stories matter!

For some music here is a song called 'Storyteller' by Morgan Harper Nichols (with Jamie Grace).