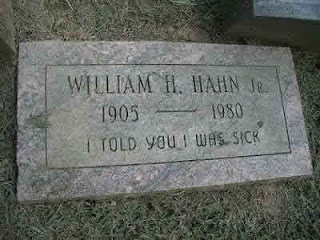 An exercise I've observed at youth retreats is to invite the participants to think about what they would wish their tombstone to read. Such an exercise sounds a little dark and morbid, but it is meant as a way of encouraging them, whilst still young, to think about what kind of legacy they want their lives to leave after they have gone. If you have an idea what you would like your life to become, then it is never too early to start thinking about how you can make it happen.

As a preacher, who has as part of his job description, the giving of eulogies at funeral services, one is sometimes put in in the position of not having known the deceased person as well as everybody else in the room. A colleague once shared a story of how he was called in at the very last minute to conduct a service for a family when the scheduled minister didn't turn up.

When it came to time for the eulogy, he asked the congregation if any of them had words to say about the deceased. He was greeted with a stony silence. 'Surely' he asked again, 'There must be something you can share about the departed as we gather at this solemn time?' After a few moments of further uncomfortable silence an elderly gentleman, in very gruff voice, said, 'Well... he wasn't as bad as his brother!' With that my colleague decided it was best to move straight on into a time of prayer.

This coming Sunday in the liturgical calendar is known as 'Christ the King Sunday'. We'll be taking a look at some of the last words attributed to David, Israels greatest king. (2 Samuel 23:1-7) These are not the only 'last words' attributed to David. There are a couple of passages where his final utterances are mentioned.

What they have in common is that they are overwhelmingly positive. They mention nothing about some of the moral failures David experienced. To put it mildly, David had his less than exemplary moments. But, as this passage fails to mention them, then like a preacher giving a eulogy, we'll stick with the good points.

At his best David was a fearless leader with a deep trust in God's ability to meet the needs of God's people. When he was confronted by his wrongdoing he was prepared to take the consequences and truly repented for his sinful actions. He recognized that his mistakes didn't just touch his own life, but brought into question the goodness of the God he served.

Seeking to be a faithful friend to others and being prepared to admit to the mistakes that we all make... if when we are gone we were remembered for just those two things, then I think it could be said that we have lived well. Should it be also judged that we have been faithful to our God and that we have given some people some joy along the way, then I'd be content with that as well.

As for 'Being better than my brother'? Well, if you'd met my brother, you would know he is an awesome guy. At the end of the day, we shouldn't be worried about what other people think of us, but simply endeavor to be the people we believe God is inviting us to become.

For further thought here is an excellent song by Nicole Nordeman titled 'Legacy'.