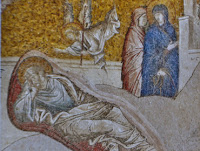 An angel of the Lord appeared to him in a dream and said,
"Joseph son of David, do not be afraid to take Mary home as your wife” (Matthew 1:20 )

I confess that, from within my 21st Century worldview, I find it easier to accept angels coming to people in their dreams than actually appearing in physical form during their waking hours. Both sorts of encounters appear within the scriptures. Last week at Mount Hebron we talked about an angelic visitation to a young maiden. That sermon can be found here. Zechariah, Mary and a whole gang of shepherds have close encounters of a physical kind. However the angelic encounters of Joseph come during his sleeping hours.

Joseph's encounter is no less life changing than those of his contemporaries within the Christmas story. Being guided by his dreams becomes a feature of his life. In three other incidences, an angel appears in his dreams to tell him to flee the murderous intentions of Herod and then, later, to return to Israel and finally settle in Nazareth.

For Joseph these dreams were powerful. They persuaded him to go against everything his culture told him he should do if his betrothed wife informed him she was pregnant outside of their marriage. The expectation was that their relationship would end and that she would be punished. Thankfully, not only did Joseph love and trust Mary far too much for that to happen, but through his angelic dream he understood that this was a God thing.

As he was fully involved with the raising a new child, Joseph probably had no idea about the crazed intentions of Herod to murder all the children in his region because he had heard rumors one of them might turn out to be a rival for the throne. Yet, Joseph, on the premise of a dream, uprooted his family and headed to unfamiliar territory. If he hadn't, then there may have been no Christmas story.

When it comes to the purposes of God, dreamers are welcome! Particularly those who act upon the dreams they believe God has placed within their hearts. As we draw near to the end of another year, it is always a good time to dream dreams for our future. Christmas offers us a message which tells us that 'Dreamers are always welcome'.

So here is the challenge. What are our dreams, for ourselves, for our families, for our churches, for our communities, for our nation, for our world? Maybe we should write them down. It may take a while to figure out which are simply wishful thinking and which are things God is calling us to pursue. But often, over time, it becomes clear to us where our passions lie. Involving ourselves in disciplines such as worship and study, prayer and service can help us to clarify our goals.

We may not have the luxury of angelic encounters, physical or otherwise. Yet God has a way of guiding lives that are open to possibility. As we travel through this Advent season, dare to dream!

I could not resist posting Bing Crosby and Frank Sinatra singing 'I'm Dreaming of a White Christmas'. Yes, I know. It's not a carol or a hymn nor even a praise song. But it is the best selling single... ever... and I just happen to love it. If you want to sing more traditional carols... then visit your local (church) as soon as you can!