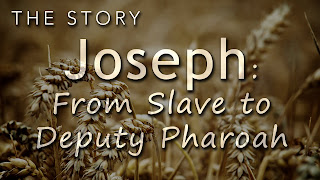 Here at Mount Hebron Presbyterian we continue to follow a series focusing on the chronological bible version, by Max Lucardo and Randy Frazee, titled 'The Story'. Last week we talked about Abraham and the beginning of God's nation building program. Sundays sermon can be found here. This week we move on to think about the Story of Joseph. Some questions that go along with 'The Story' chapter 3 can be found here.

People nearing mid-life often crash into some startling and unexpected observations. For instance, we all dreamed big dreams when we were younger. But as we move at a break-neck pace through our twenties, thirties, forties and beyond, we eventually slam head on into the realization that some of our dreams will never be realized.

That observation throws some people into a crisis. Some don’t make it that far with their aspirations, having already given them up somewhere along the way. Some run into conflict that makes them weary and they settle for less. Still others make bold decisions to trade one dream in for another.

That’s what Joseph did. Talk about dreams! He had some big ones. At seventeen he dreamed his ten older brothers would bow down to him. It’s enough he dreamed that dream. What makes it worse is that he told his brothers about it.

His older brothers already had issues with their younger sibling. Their father favored Joseph. He had even given him a valuable, multi-colored coat. That’s the modern-day equivalent of a parent of four teenagers giving one an iPhone and the other three a stack of quarters each for a pay phone (assuming they could find one these days). The brothers banded together and tossed the dreamer in a ditch, eventually selling him into slavery at the first opportunity. The next thing Joseph knew he was waking up in Egypt.

From there his life was a rollercoaster ride. One minute a slave. The next in charge of an Egyptian official’s house. The next in prison. The next in charge of the prison. Then he found himself in front of Pharaoh, called upon to interpret the leader’s dreams. With God’s help he was able to warn Pharaoh he would have seven years of abundant crops that he should be put in storehouses in anticipation of seven years of famine. Recognizing his wisdom, Pharaoh put Joseph second in command of all of Egypt.

Because of God’s personal involvement in his life, he was able to save his family. The same family that God was building into a nation. Joseph could have lost his life getting caught up in the details of his life, chasing his dreams and desires. Instead, he chose a better story. God’s story.

We can do the same. If our life’s dream has stalled, we can seek God. If our dream, now realized, is not all we thought it would be, we can seek God. God can give us another dream. A better one. Just like Joseph. Then we’ll have a story to tell.

For some music, a song we'll be singing this coming Sunday; 'Blessed be Your Name', by Matt Redman. The song reflects on the changing fortunes of our lives and invites us to view them as a reason to bless God.