Stranger in A Strange Land 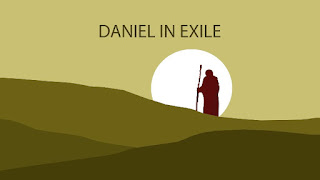 Last week, here at Mount Hebron Presbyterian Church as we followed “The Story”, we saw how the people of Judah were defeated and led into exile in Babylon. But God had certainly not finished with them. Whenever they acted in a faithful way, God was right there for them. This week we take a look at some of those who remained faithful in the midst of an alien culture.

The first group deported included Daniel and his friends Hananiah, Shadrach, and Azariah.  They were given the Babylonian names of Belteshazzar, Shadrach, Meschach, and Abednego. While in exile these young men lived powerful, purposeful, prayer-filled lives.  They prayed to their God when they were told not to.  They were bold to do what was right regardless of the obstacles placed in their path.  And they made a difference.

The singer/songwriter Leon Russell has a song called “Stranger in a Strange Land.” (Click here to watch and listen. ) In the song he muses, “Well, I don't exactly know, what's going on in the world today, don't know what there is to say, about the way the people are treating each other; not like brothers!” In the light of our current world... the political rhetoric, the violence and the mistrust that seems to characterize much of what we see and hear, maybe we can identify with such a sentiment.

Yet, as Christians, feeling like a 'Stranger in a strange land” should not surprise us.  According to 1 Peter 2:11-12 those who follow the Kingdom path are always exiles.  Peter writes: “Dear friends, I urge you, as foreigners and exiles, to abstain from sinful desires, which war against your soul. Live such good lives among the Gentiles that, though they accuse you of doing wrong, they may see your good deeds and glorify God.”

Elsewhere scripture speaks about faithful people as being 'in' the world, but not 'of' the world. Such passages speak of a tension that is always going to exist in the lives of those who choose to follow a different path than those who are around them.

The challenge for the person of faith is to allow the teachings that guide them to take precedent over the prevailing winds of the culture in which they live. This was where Daniel and his friends excelled. Staying true to their convictions challenges them and leads them into some highly confrontational situations, but their trust in God is vindicated as they witness God acting on their behalf.

They thrive on a diet that has not been offered to idols, they refuse to bow down to the golden statue of Nebechadnezzar, they will not give up on prayer, they go through the fires of a furnace and Daniel is delivered from a pit of lions. Dramatic instances of God's deliverance!

Through his visions and words, Daniel becomes a person of great influence within the strange land in which he finds himself. Had his life not been one of faithfulness, this could not have happened.

We will all have those days when we feel that what we believe does not fit in well with the culture that surrounds us. What would Daniel suggest? Be faithful anyway!

Well, I don't exactly know
What's going on in the world today
Don't know what there is to say
About the way the people are treating
Each other, not like brothers

Stop the money chase
Lay back, relax
Get back on the human track
Stop racing toward oblivion
Oh, such a sad, sad state we're in
And that's a thing