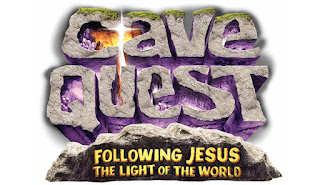 Over the last months we've been taking a look at "THE STORY". Our sermon about Esther "The Queen of Beauty and Courage" can be found here. But over the summer months we are taking a break, returning in September to The New Testament section of the Book.
This coming Sunday, July 17th, at Mount Hebron Presbyterian Church we are focusing on our upcoming Vacation Bible School program - “Cave Quest” - which takes place each morning from July 18 -22. Weeks of preparation and numerous volunteers will combine to make it a memorable week, both for participants and leaders.

One of the things this years curriculum encourages the participants to do, is look for “God Sightings.” To quote from the leaders manual; “God hasn't retired, you know. God is as busy now as God's ever been. But until you see that with your own eyes, it's tough to have a vibrant faith. God can seem distant or impersonal.  God IS active in our everyday lives... we just have to learn to look. We have to make it a habit to keep an eye out for the daily, overwhelming evidence that God is doing great things all around us.”

It seems these days the media is full of bad and worse news each successive week. Political shenanigans. Shootings and violence. Civil unrest against injustice. Natural Disasters both at home and abroad. It can feel like we are living in a very dark cave. The idea of “God sightings” is one we can all do with adopting. Because there are good and wonderful things happening in our world.

And one of those great things... happening in our church, and in numerous congregations throughout the land... is the task of Christian education of children through Vacation Bible School Programs. Many of the kids who attend V.B.S. programs are not regular church participants, so such weeks offer a unique opportunity for sharing the good news of the gospel.

At “Cave Quest” participants will explore such themes as “Jesus gives us hope!”, “Jesus gives us Courage”, and “Jesus is the Light.” These are great Christian themes that the church has given voice to over the centuries.  I am reminded of a hymn by Howell Lewis, written back in 1922, “Lord of light, whose Name outshineth, All the stars and suns of space, Deign to make us Thy co-workers, In the kingdom of Thy grace; Use us to fulfill Thy purpose, In the gift of Christ Thy Son.”

I remain convinced that the gospel message is this world's greatest hope. As John writes in his gospel  “The light” (meaning the light of Jesus Christ) “shines in the darkness, and the darkness has not overcome it.” (John 1:5)  In the darkest of situations it only talks a small, flickering candle to dispel a great deal of darkness. As we faithfully pursue the things we believe Christ is calling us to, then by the work of the Holy Spirit, God-sightings will come our way.

As the “Cave Quest” manual suggests:-  God IS active in our everyday lives... we just have to learn to look!”

One of the songs recommended for use in “Cave Quest” is “This little light of mine”. Gospel music turns up in the most unexpected places these days. I'm not sure our V.B.S. rendition will be as energetic as this performance on “Britain's Got Talent” but as you'll see, it sure impressed the judges!
Following V.B.S. I'm heading out to Pennsylvania as part of the leadership team for the Trinity Youth Conference and then taking a couple of weeks vacation. This means there won't be a blog for a few weeks. But check back in a few weeks time and normal service will be resumed :-)
Rev Adrian J. Pratt
Posted by AJP at 7:58 AM No comments:

Roll of The Dice 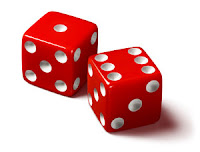 Sometimes we may feel like life is a big gamble. As though the outcome of our life is resting on how the dice roll for us.  If the dice roll right, we get “lucky.”  If they roll badly, our life goes down the tubes.

There are times when the stars seem to align just right and we find our self basking in blessings.  Then there are those times when everything seems out of sync and we find our self in a hard place.  Some call this a coincidence.  Others would call it luck.  But another group would say that someone is working behind the scenes working out our destiny. As people of faith we believe it is more than just a someone.

Esther would understand.  She was minding her own business as her people were captive in Persia.  Meanwhile a guy called Haman—who has been given great authority by the King of Persia—is developing a hatred for Jews.  In particular, he hates Mordecai.  It seems Mordecai will not bow down to Haman whenever he paraded through the streets of Susa.

Haman decided to teach Mordecai a lesson.  He arranges for King Xerxes to sign a decree that declared that on a certain day all the Jews could be killed.  And anyone killing a Hebrew would be allowed to keep the personal possessions of the deceased Hebrew.  To determine the exact day when the Hebrews will be exterminated, Haman rolls a dice.  “Adar the 13th”  becomes the target date.

In the meantime, the king had been having queen issues. Queen Vashti refuses the king’s summons and so  is released of her queenly duties.  Then, because he needs a new queen, he holds the equivalent of a “Bachelor” contest to find a new wife.  The short story is that Esther gets the rose and becomes the new queen.

King Xerxes did not know his new queen was a Hebrew.  Nor that Esther was a relative of Mordecai.  After Esther intervenes, the king adds another edict that will allow the Hebrews to defend themselves.  This turned out well for the Hebrews and bad for any Persian that attacked a Hebrew on Adar the 13th. And Haman?  Well, in a strange twist of events he wound up on a gallows he had erected for the execution of Mordecai.  Sometimes, as they say, “What goes around, comes around.”

One unique thing about the book of Esther is that you never find the name of God mentioned.  Not once. There are days when we may feel that God is not around. The story of Esther reminds us that God is always with us, but sometimes behind the scenes, working things out for “good for those who love Him” (Romans 8:28).

For some music... a song inspired by the book of Esther in “The Story” - Mandisa sings “Born For This.”

Rev Adrian J. Pratt
Posted by AJP at 5:55 AM No comments: