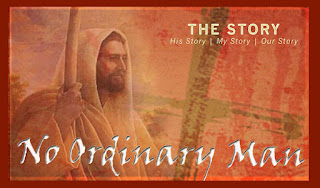 Here at Mount Hebron Presbyterian Church we continue to explore our program “The Story.” Last week we saw how the ministry of Jesus began to be established. (Sermon can be found here.) This week, in Chapter 23, we witness the growing momentum of His ministry. Most of His work takes place around the Sea of Galilee, and many flock to witness all that He does. One things is clear. There is nothing ordinary about Him or His work.

No one had seen a teacher like Jesus before. Sometimes Jesus taught in parables. Other times He taught directly (such as in the Sermon on the Mount). For those who took it on board, Jesus’ teaching was life changing. Much of His message sought to re-frame what God was like. “God is like a shepherd going to look for the lost sheep.” “God is like a Father welcoming back a wayward son.” “God is like a woman who rejoices over finding her lost coin.”

Yet Jesus was more than a moral teacher. He worked miracles. He multiplied fishes and loaves so that they could feed 5,000 people. He healed the souls of people who were out of their mind. He calmed a storm just by speaking a word. He healed the sick and brought the dead back to life. These miraculous acts left people astounded.

Jesus also made it clear what the stakes of following Him truly were. “Take up your Cross and follow me!” To a crowd who were raised on stories of their ancestors eating manna in the desert, Jesus proclaimed that He could give them something that would lead to ultimate fulfillment. Eternal life, true life, abundant life! He proclaimed that He was the “Bread of Life.” This was a tough teaching that left many people confused. “From this time many of His disciples turned back and no longer followed Him.” (John 6:66)

Jesus asked His closest disciples, the Twelve, if they would leave Him as well. Peter replied that they had nowhere else to go because they had come to believe that Jesus truly was the chosen one of God. There had never been any one like Him before. There never has been since.

There was nothing ordinary about Jesus. His life, His ministry and His influence upon our world have been extraordinary. It is for us to understand His significance and entertain the possibility that, under the influence of His love, we can also live in a way that is far from ordinary!

For some music, a thoughtful song by Janice Kapp Perry that complements our theme; “No Ordinary Man.” If you are in the area Sunday morning at 10:00 am, join us as we gather around a table laid with bread and wine, for an extraordinary remembrance of all He claimed to be!

Last week in our worship service here at Mount Hebron Presbyterian Church we were thinking about the earliest life of Jesus, the unusual circumstances of His birth, the way His coming fulfilled ancient prophecies and even the cosmic significance given to Him by John when he writes “The Word became flesh and dwelt among us.” (John 1:14). We finished with Jesus as a young boy, astounding the teachers in Jerusalem with His knowledge. Clearly, Jesus was a child of promise. Our sermon from the day can be found here.

We continue our journey through “The Story”, by Max Lucado and Randy Frazee. This week we'll look at chapter 23 and observe how the ministry of Jesus began.

On the banks of the River Jordan appears John the Baptist declaring “Prepare Ye the Way!” Following Jesus's baptism He endures temptations in the desert. As Jesus begins His ministry He interacts with people in many different stations of life. Some are like Nicodemus, described as being a “Young ruler”. Others, like a Samaritan woman He meets down by a well, are people on the fringes of acceptable society.

We begin to learn of acts of healing and deliverance and of miracles that astound those who witness them. We also see how He gathers around Himself a small, but totally committed group of disciples, to whom He begins to teach the deep things of God's Kingdom. But all is not plain sailing. Some are far from welcoming towards His ministry and the first signs of opposition start to appear.

These earliest days of ministry can offer a pattern for our own spiritual journeys. We hear the call of John the Baptist, “Re-evaluate how you live. Get ready for something better!” We have our own wilderness experiences and battle our own temptations. Our hearts are enlarged to see all people as being those whom God loves, and we are encouraged to find the good in even the most difficult of situations.

We recognize that we all have things we need delivering from and that we all need healing and wholeness. We see how we all need to learn to value what is really important in life and move beyond that which is superficial and has no eternal value.

We may gather with those of a like mind to find encouragement for our faith journey. We identify with disciples who seek to learn through scripture and prayer and service. We may even experience a few miracles that we find hard to explain, or breakthroughs that we had never expected to occur.

For sure, there will be those around us who neither understand or appreciate our desire to follow One who described Himself as “The Way, the Truth and the Life.” (John 14:6). But, once we hear the call of Jesus Christ to follow, it is hard to dismiss it. Once we begin the journey, though we may pass through times of discouragement, we know that faithfulness encourages us to keep moving forward.

A writer of a previous age, John Bunyan, described his journey of discipleship as “The Pilgrim's Progress.” May there be with each of us the heartfelt desire to be a pilgrim. I believe to follow such a path will bring many challenges, but also unexpected blessings!

For some music, a version by Daniel Versteegh, of a hymn I recall from my schooldays in England, “He who would valiant be...”

After a break for summer, our blog has returned. Here at Mount Hebron Presbyterian Church our study of Max Lucado and Randy Frazee's book titled “THE STORY” recommences.  This week we begin looking at passages from the New Testament. Chapter 22 of "The Story," titled “The Birth of The King,” talks about the earliest life of Jesus. Randy Frazee offers the following meditation.

“The knock came at the door of the inn. It was late. We can imagine the innkeeper had been burning both ends of the candle. The census crowd had packed Bethlehem and he had finally locked the doors for the night. Until the knock.

He shuffled his feet through the dark and made his way to the door. Opening it with the slightest of cracks he peered out to see a young couple. Looking more closely he saw a young woman who was about to give birth to a child. Rooms were full. It was late. And they didn’t look very special. He had to decide whether he would find room for them or not.

And you will too. John’s rendition of the birth of Christ comes in a few short words: “The Word [logos] became flesh and made his dwelling among us” (John 1:14). Greek hearers understood the word “logos” as the representation of God. The essence of God was found in God's Word.

John writes about beginnings. John writes about God’s very representation dwelling among us. And he writes to tell us that we have the same decision to make as the innkeeper. Will we find a place for Jesus in our lives or will we send Him away?
As we begin a new season of worship and study here at Mount Hebron Presbyterian Church, we pray that God's Holy Spirit will continue to guide the story of our own lives. Wherever this Fall season may find you, we hope you will be able to make a space for reflection and renewal as you travel upon your own spiritual journey.

As we'll be having a “CHRISTMAS IN SEPTEMBER” feel to this coming Sunday ... for some music a Christmas carol “Hark the Herald AngelsSing”. The verse “Veiled in flesh the Godhead see, Hail the Incarnate Deity, Pleased as man with men to dwell, Jesus our Emmanuel!” is particularly appropriate for Chapter 22 of “The Story.”

Rev Adrian Pratt.
Posted by AJP at 7:22 AM No comments: