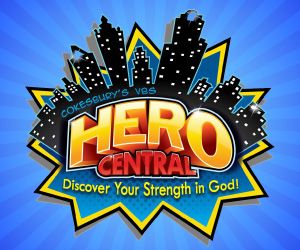 Last week we took a look at the providential story of Isaac finding a wife. Our sermon can be found here. But now... it's that time of year again! Churches throughout the area are hosting their annual Vacation Bible School programs and Mount Hebron is no exception. This years program is titled “Hero Central.”

Abigail is the wife of a wealthy land owner called Nabal. When working away from home, some of Nabal's workers are protected by a “soon-to-be king” guy called David. However, when David's men end up in Nabal's backyard, he is not so keen to offer them any hospitality, an action that makes young David extremely angry and he is about to attack Nabal's lands and wreak havoc upon the people.

And so that might have been... were it not for the wisdom and intervention of Abigail, who flouts custom, goes against the wishes of her mean minded husband Nabal, and intervenes in a way that saves her people. Things also turn out pretty well for her in the end. You can read the story for yourself in 1 Samuel 2:2-42.

As I consider Abigail's story I think about how my own life has been surrounded by many “Heroes” of faith. I recall friends, who, when as a teenager I was rebelling against just about anything I could think of rebelling against, never gave up on trying to persuade me to try church instead. I remember those who were a shining example of common sense and faith, and proved to be influential mentors for my personal journey.

I recall those teachers and pastors, who when I felt a call to ministry, not only encouraged me, but also cautioned me, to consider what I was taking on. Their personal stories and many prayers led me to a place where I could be sure that this was something I was being called to pursue.

I think of those who throughout my ministry have offered gifts of hospitality, generosity, and prayer that have kept me moving forward. I have a special place in my heart for those who recognized times I was truly struggling and have been there to listen and offer support. (Not least my wonderful wife!)

I'm sure as you look back on your own life you can find many “Heroes” who have helped you become who you are today. They may not be biblical characters. They are more likely to be families and friends. But heroes they are, nevertheless. So thank God for them!

And as faith communities around the globe engage in vacation education events, be they mission trips, V.B.S. or summer camp, so many of us have the opportunity to be a role model and mentor to others. We may not be heroes... but we can be faithful. May God help us to be channels of God's love to those we seek to serve. As our V.B.S. theme declares..“Hero Central – Discover your Strength in God!”

For some music, a song we'll be learning both in our upcoming pre-VBS service and during the week... Everlasting God, by Chris Tomlin.