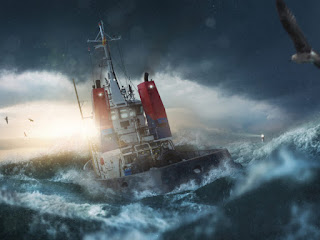 Gil Fronsdal, a spiritual director and teacher, invites her readers to contemplate the following story.

“Imagine two people setting out to cross a large lake, each in a small rowboat. The first sets out on a clear day with the lake surface still and flat like a mirror; a gentle breeze and a steady current push the boat from behind. Each time the oars are dipped into the water, the boat shoots across the lake. Rowing is easy and delightful. Quickly the person reaches the far side of the lake. The rower may congratulate herself for being quite skilled.

The second person heads out across the same lake during a great storm. Powerful winds, currents, and waves move in the direction opposite the boat. With each pull of the oars, the boat barely moves forward, only to lose most of the distance gained when the oars are raised out of the water for the next pull. After much effort the second rower makes it to the far side of the lake. This rower may feel discouraged at his lack of skill.

Probably most people would prefer to be the first rower. However, it is the second rower, who though discouraged, has become stronger from the exertion and is thereby better prepared for future challenges.”

Often in life we don't get to choose to row into the storm... the storm finds us anyway. That's a message sadly reinforced by recent events in downtown Ellicott City which, for a second time, experienced such devastating flooding. Traveling through the storm, can make some stronger, but for others it is not only discouraging, but defeating.

Seeking to maintain a positive outlook during a time of crisis is never easy and sometimes impossible. It is at such times we realize that we function best when we are connected to others. That none of us can go it alone. That there are days when we have to to admit defeat, let go and let God!

In the face of adversity “letting go” is not the same as “giving up.” I had a friend who always tried to face any crisis, major or minor, with the question; “So?” “So what do we do next?” “So, now this has happened and that has ended, we are faced with two choices. So which one do we make?”

Returning to our illustration of the rowers. The one who rowed across the lake and exited the boat feeling rather pleased with themselves, had done nothing wrong. They did what they needed to do. And when we have days like that, we can be thankful.

The one who crossed the lake in the storm and exited the boat feeling discouraged, is in a good place to ask themselves the “So?” question. “So what did I just learn? That going out in storms isn't always a good idea? That when I'm under stress I tap into resources I never knew I had? That I can make it through to the other side, even when I'm not sure I can do it?” You feel that the second one has gained more than the first. Next time a crisis comes along, they are in a better shape to face it.

Life will bring storms. Some of them will leave us feeling defeated and discouraged. But we may also discover that it is the tough times that strengthen us in ways we are not even aware of. We are not alone. We have others around us to lift us when we fall. We have a God who takes what is broken and creates beautiful things from the wreckage.

Last week here at Mount Hebron Presbyterian Church we were thinking about how little things can become big things. Our sermon “Seeds of Faith” can be found here. This coming Sunday we are looking at a passage from Mark 4:35-41, when the disciples of Jesus find themselves caught up in the middle of a storm.

For some music (a song which may well feature as part of our Sunday worship) “Prince George Winyah Episcopal Church Junior Choir” sing “With Jesus in the Boat wecan smile through the Storm.”

The Reverend Adrian J Pratt B.D.
Posted by AJP at 7:09 AM