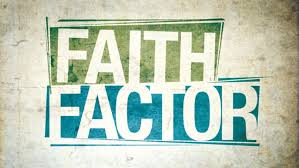 Here at Mount Hebron Presbyterian Church we have reached the second in a series of sermons taking a look at the biblical book of Galatians. Last weeks sermon “Faith and Life” can be found here. In this weeks passage (Galatians3:23-29) Paul talks about not living from a place of fear but from a place of faith.

Fear grabs our attention. It gets us ready to fight or flee. Whether we mask our fear with bravado or slink away to seek refuge, it can have a powerful effect on our thinking, our decisions and our actions. A healthy fear can keep us from harm. But fear can also keep us from doing what we need to do. Sometimes it provokes us into wrong or dangerous responses.

Increasing troubles in the world and our neighborhoods can make us feel like we are living in a fear zone. People play on our fears for their own benefit. There are things that should cause us concern. Terrorism, mass shootings, violent crime, disease, natural disasters, all of these are in the news and often in our entertainment and our nightmares.

Some dangers, like fear of sharks, flying and mass shootings, we tend to overplay. Other much more common killers, such as auto accidents and germs, we tend to downplay. Many of the things we fear never happen to us, and even when they do, all our anxieties and worries generally have done nothing to protect us.

Fear can reach into our spiritual life. In Galatia teachers had come into the church who were using fear to gain control over others. Paul had come to them preaching a gospel that was all about grace. He had taught them that every person was welcome in the Kingdom of God, that old barriers of prejudice that separated people had been torn down, because of the life, ministry and death of Jesus Christ.

To Galatia had come teachers who were questioning Paul's teaching and the congregations standing with God. They were insisting that they needed to submit to various practices and rules that were present in Judaism. This included everything from circumcision to dietary laws. Paul contradicts this false teaching by reminding them that, while the law had worked as a “disciplinarian” to show them their faults, faith in Jesus Christ should now be the determining factor in their lives.

He writes in Galatians 3:25-26 “But now that faith has come, we are no longer subject to the discipline of the law, for in Christ Jesus we are all children of God through faith.” Their faith factor was far more important than the fear factor.

As we face the things that cause us anxiety in our lives, we do well to remind ourselves that we live every day in the presence of God and are constantly subjects of God's grace. God desires what is best for us and has opened the doorway, through Jesus Christ, for us to know God's love and the guidance and comfort of God's Holy Spirit.

It is as we put our faith in what God has done... is doing... and will do... that the faith factor kicks in and the fear factor starts to diminish. We are not promised a trouble free existence, but we are promised that whatever we face, God will walk with us every step of the way, as we place our trust in God's amazing grace.

For some music, a song about having faith not fear... Greg Sykes sings “ All I Need to Know.”

The Reverend Adrian J. Pratt B.D.
Posted by AJP at 6:01 AM No comments:

The Gospel of Grace 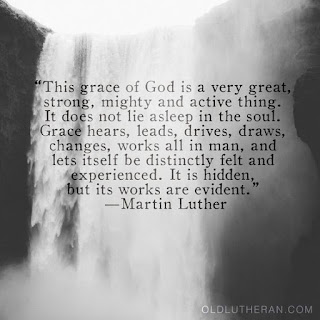 Last week at Mount Hebron Presbyterian Church we celebrated our nation and our churches Scottish heritage. Our sermon from the day can be found here. This coming Sunday we'll be beginning a series of sermons that take a look at the biblical book of Galatians, sometimes described as a letter that outlines “The Gospel of Grace.” Our first passage we'll consider is Galatians 2:15-21. It talks a lot about grace.

The life of Protestant Reformer, Martin Luther, was defined by his endeavor to discover the grace of God. For many years he struggled to figure out how his life could ever be acceptable to God. He read the Bible. He offered his life in service and joined a monastery. He went on pilgrimage. He fasted and he prayed.

For a long time he felt the law of God asked too much of him. His 'good' was never good enough. No matter what he tried, he found no rest for his soul. A transforming moment came as he reflected on a verse, that first appears in the Old Testament book of Habakkuk; “The just shall live by his faith.” (2:4)

Luther suggests that this seed, sown by the prophet Habakkuk, came to full flower in the ministry, death and resurrection of Jesus Christ. The apostle Paul, (another disciple whose life was dramatically changed by grace) writes in the book of Romans 3:24 “All are justified freely by His grace through the redemption that came by Christ Jesus. ”

Luther explains;“Night and day I pondered until I saw the connection between the justice of God and the statement that “the just shall live by his faith.” Then I grasped that the justice of God is that righteousness by which through grace and sheer mercy God justifies us through faith. Thereupon I felt myself to be reborn and to have gone through open doors into paradise. “

We don't need to prove to God how good we are. What a waste of effort! Because none of us is that good! Rather, God desires that we experience how good life can be when we allow Christ to live in us.

God invites us to trust that in Him our lives find their true purpose. That as we apprehend what has been done for us through the Cross and Resurrection, we will know that we are loved. We are encouraged to imagine the possibilities that a life open to and molded by God's Holy Spirit can offer us.

It's not easy to stop thinking we are in charge and let Jesus take the wheel of our lives. To live into the statement; “Not my will be done Oh Lord, but thine” is a challenge faced by every person who seeks to follow Jesus Christ. Martin Luther discovered that even becoming a monk could not give him the relationship with God he desired. Only grace could do that.

Later in life he writes “This grace of God is a very great, strong, mighty and active thing. It does not lie asleep in the soul. Grace hears, leads, drives, draws, changes, works all in man, and lends itself to be distinctly felt and experienced. It is hidden but its works are evident.”

The hymn writer John Newton simply described grace as “Amazing.” I pray that each of us will find ways to let go of the wheel, and allow grace to guide our lives through the “Love of God, the grace of our Lord Jesus Christ and the fellowship of the Holy Spirit.” (2 Corinthians 3:14)

Having mentioned allowing God to be in charge I could not resist making our music choice this week... “Jesus Take the Wheel” by Carrie Underwood.

The Reverend Adrian J. Pratt B.D.
Posted by AJP at 6:25 AM No comments: 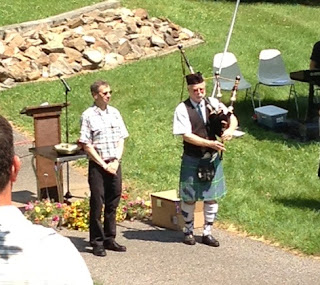 Last Sunday we were thinking about the day the fire came, the Day of Pentecost. Our sermon from the day can be found here. This week, here at Mount Hebron Presbyterian Church, we hold our annual service that celebrates our Scottish heritage. Weather permitting we meet in the outside beauty of our amphitheater and mark the occasion with a bagpiper and liturgy from the Scottish Presbyterian tradition.

Scottish people have always had a reputation for their strong spirit of independence. When the Romans attempted to conquer the world they only managed to get as far as the border of Scotland. A recent Scottish comedian joked that when they were under threat they built a wall, named it after the emperor and then got Rome to pay for it! “Hadrian's Wall” survives to this day.

I recall leading a youth retreat in North Wales. Each year the Presbyterian Church of Scotland would send a small group to be a part of the fellowship week. This particular year three girls and one boy were there, representing their country.

When it came to the end of week Talent show, Rory (who had been relatively quiet throughout the week) appeared in his kilt, jumped onto a table and sang the Scottish national anthem at the top of his lungs, accompanied by fist pumps and with tears rolling down his cheeks. He was more than a little proud of his heritage and independence. Movies like “BraveHeart” keep in the public mind that the Scots are a people to be reckoned with.

Following the “Highland Clearances” that began in the 1750's (when many in Scotland were disenfranchised from their historic lands) many Scots emigrated to the New World to seek a home where they could continue to flourish. The history of the United States bristles with their influence. To mention just a few famous folk...

Of the 45 men who have served as President, an astonishing 33 have been of either Scottish or Ulster-Scots descent. This includes George Washington, Theodore Roosevelt, Woodrow Wilson, Gerald Ford, Ronald Reagan and Bill Clinton. President Donald Trump's mother, Mary Anne MacLeod, was an immigrant from Glasgow.

Andrew Carnegie the industrialist, was born in Dunfermline, became a business magnate, and philanthropist, who led the expansion of the American steel industry in the late 19th century and is often identified as one of the richest people in history.

Elvis Presley's roots can be traced back to a village in Aberdeenshire. The musical icon is descended from Andrew Presley, who emigrated to North Carolina in 1745.

When Scottish settlers made their home in the United States they carried with them their religious traditions. The earliest Presbyterian ministers in the U.S.A. were of Scottish or Scots/Irish descent. Needless to say, their spirit of independence and Protestant work ethic had a huge influence on the developing nation.

Such is why, each year, at Mount Hebron Presbyterian, we celebrate our national and denominational heritage with the sound of the pipes! If you are in the area, regardless of your ancestry, you are invited to join us in our celebrations.

For some music... to set the mood... the sound of bagpipes playing “Amazing Grace.”

The Reverend Adrian J. Pratt B.D.
Posted by AJP at 5:37 AM No comments:

Burned Out or Fired Up?