A Little Letter with a Big Punch 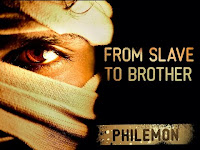 Note: This Blog will be taking a Summer Break for the next few weeks.
Sermons will continue to be posted on our sermon blog site which can be found here.

Philemon is one of the smallest books in the canon of Scripture. It is a personal letter to a man, called Philemon, regrading a slave owned by Philemon called Onesimus (which means 'useful'.)

Sometime before the letter was written, Paul has converted Philemon and his whole household to Christianity. Paul then left town and, when he writes the letter, has now been imprisoned for his efforts to spread the gospel. Onesimus, hearing of Paul's situation, goes 'absent without leave' from his Master, in order to minister to Paul's needs and see that Paul is taken care of.

Paul is extremely appreciative of all that Onesimus is doing for him. Yet he recognizes that there was a problem. Onesimus was a runaway slave. He should have been meeting the needs of Philemon, not the needs of Paul. In another of his letters, Paul had written that slaves should obey their masters as a way of witnessing to Christ.

If it were not for the gospel message, the whole thing could have been dismissed and ignored. But because of His belief in Jesus as 'Way, truth and life', Paul is not prepared to just let things be. So he writes to Philemon.

The basis of his argument is that because in Jesus Christ, Philemon and Onesimus were now brothers in the faith, Philemon should welcome Onesimus back into his household. Onesimus had acted upon the guidance of the One God they all shared a belief in. Paul believed that “There is neither Jew nor Gentile, neither slave nor free, nor is there male and female, for you are all one in Christ Jesus.” (Galatians 3:28)

Furthermore, the work Onesimus had performed had been of great benefit to Paul. In his letter Paul makes use of Onesimus's name. In verse 11 he writes to Philemon that “Formerly he was “useless” to you, but now he has become “useful” both to you and to me.” Paul knew that losing the service of a slave had financial implications and offers to pay Philemon for any loss of income.

It's a little letter with a big punch. The institution of slavery was an unquestioned feature of the Roman world. Either intentionally or unintentionally, here is Paul saying that our equality in Christ challenged the whole fabric of the way the world was structured.

Such is not a message this the world is keen to hear or act upon. The racial tensions of recent days, ignited by the murder of George Floyd, have revealed that we can turn a blind eye to the question of inequality, until we are forced to acknowledge there is a problem.

Let us pray, that the letter of Philemon will continue, like Onesimus, to be “Useful,” in guiding our thoughts and lives as we consider difficult and challenging issues of life and faith.

For some music, a classic from Sam Cooke "A Change Is Gonna Come”